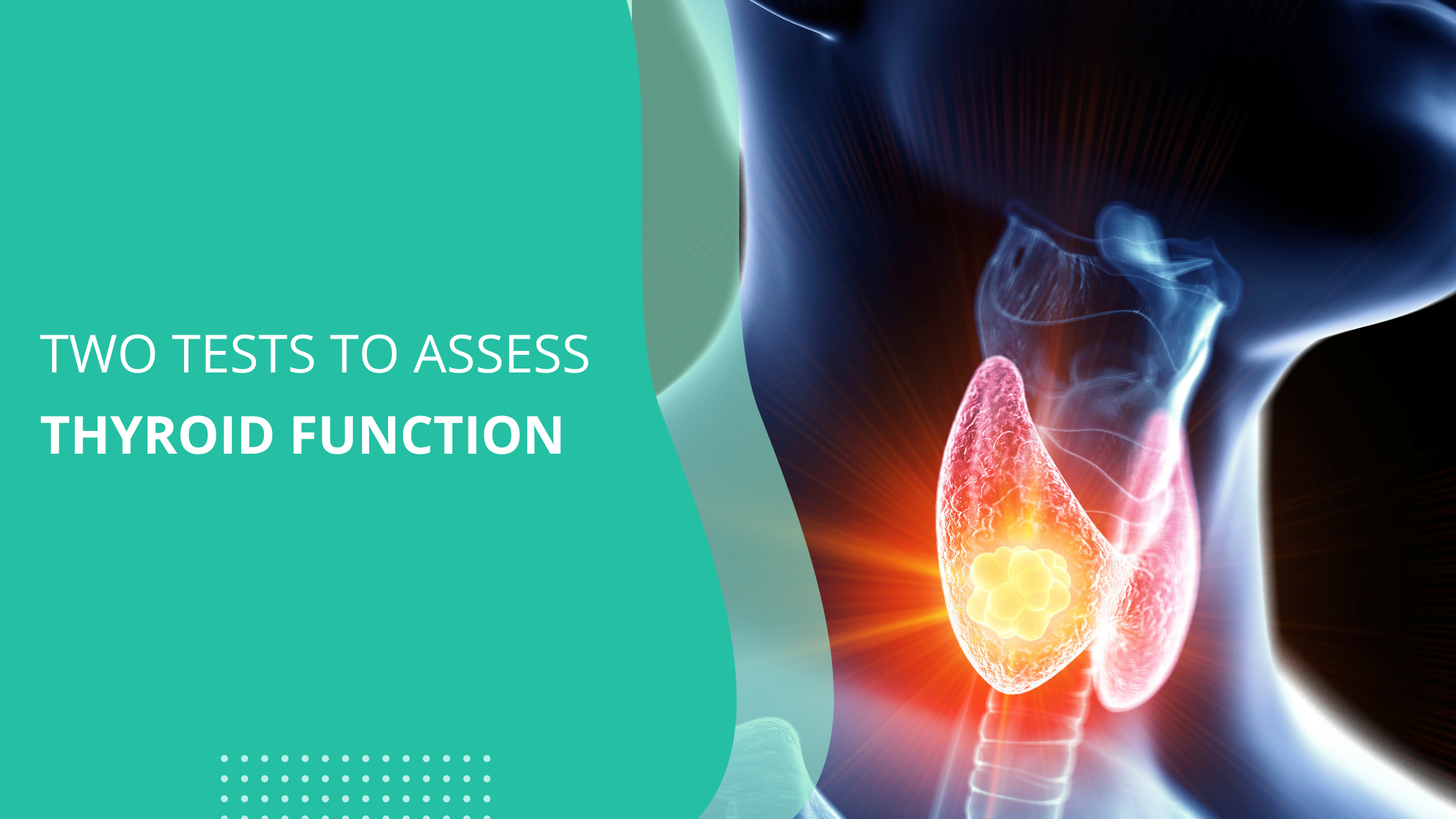 Nearly 5 out of every 100 Americans ages 12 years and older have hypothyroidism, and about 1 out of every 100 have hyperthyroidism. Every year about 12,000 men and 33,000 women are diagnosed with thyroid cancer, and about 900 men and 1,000 women die from the disease. Thyroid diseases can have major, lasting effects on health if left untreated. Thyroid diseases are easily detected and effectively treated with the help of thyroid function tests. The following two tests are used to assess thyroid function. If these lab results come back abnormal your care provider will order more tests, some lab, ultrasound, biopsy, and others.

The most frequently used laboratory tests to assess baseline thyroid function in the U.S. are thyroid stimulating hormone (TSH) and free thyroxine.

TSH is the hormone produced by the pituitary gland that stimulates the thyroid gland to produce more thyroid hormone.

A normal TSH result, which is a blood test, falls between 0.4 and 4.0 milliunits per liter (mU/L), according to the American Thyroid Association. Ranges between laboratories will vary with the upper limit generally being between 4 to 5.

Higher levels of TSH can be indicative of:

Lower Levels of TSH can be indicative of:

Thyroxine, also known as T4, is the major type of hormone your thyroid releases. Too much or too little T4 can indicate thyroid disease.

There are a few different tests that measure T4 levels. A blood test that measures both free and bound T4 is called a total T4 test. Another test measures just free T4. Healthcare providers most often use a free T4 test to assess thyroid function because it’s more accurate than a total T4 test.

In conclusion, information from the TSH and free T4 tests help your cre provider assess if your thyroid gland is functioning properly. The thyroid gland is a complex gland, and there are many factors your care provider takes into consideration before making a diagnosis.

Next posts will delve into specific thyroid diseases and associated tests, starting with the most common form of hypothyroid- Hashimotos thyroiditis. 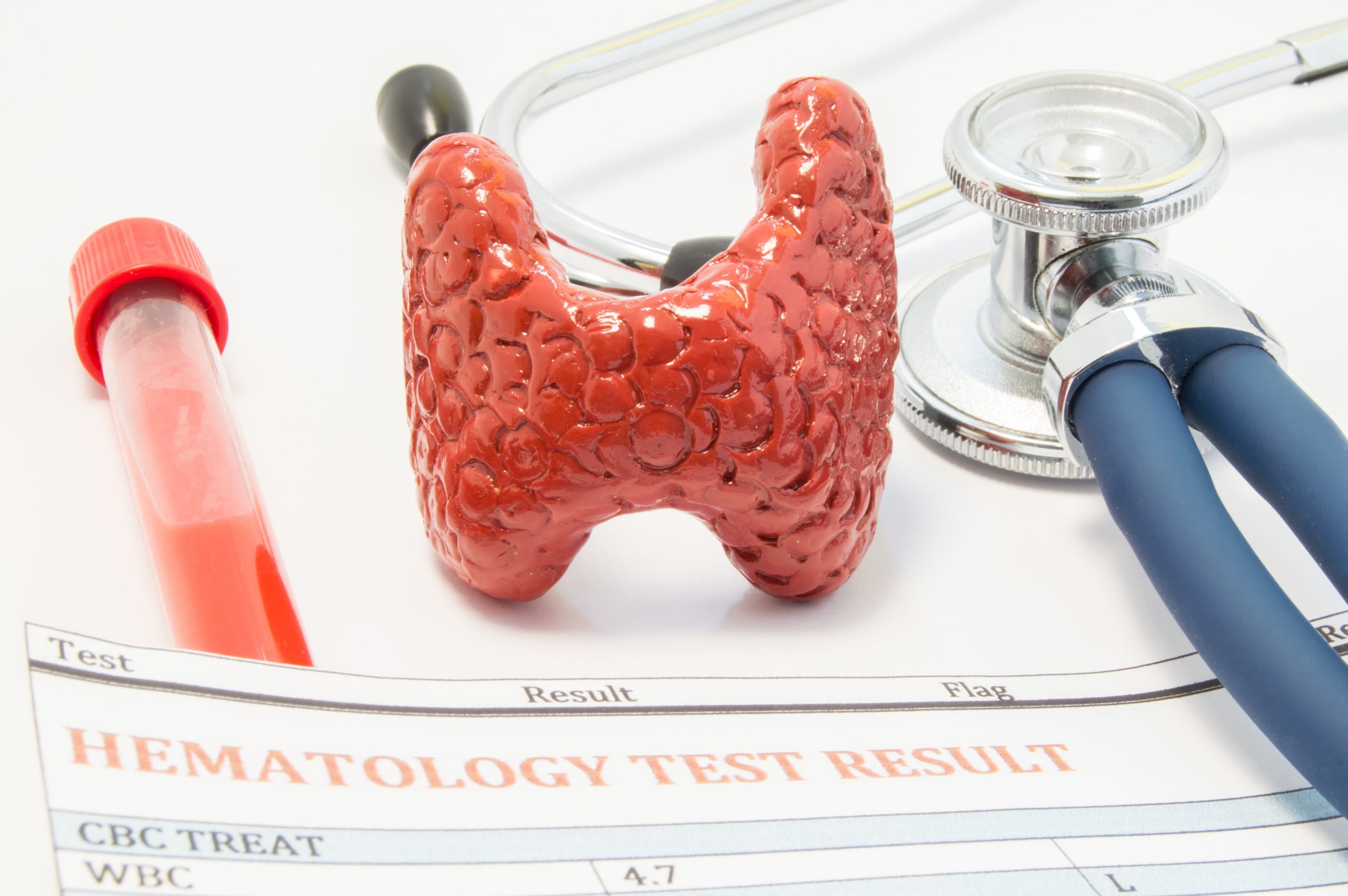 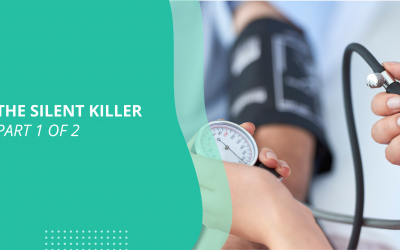 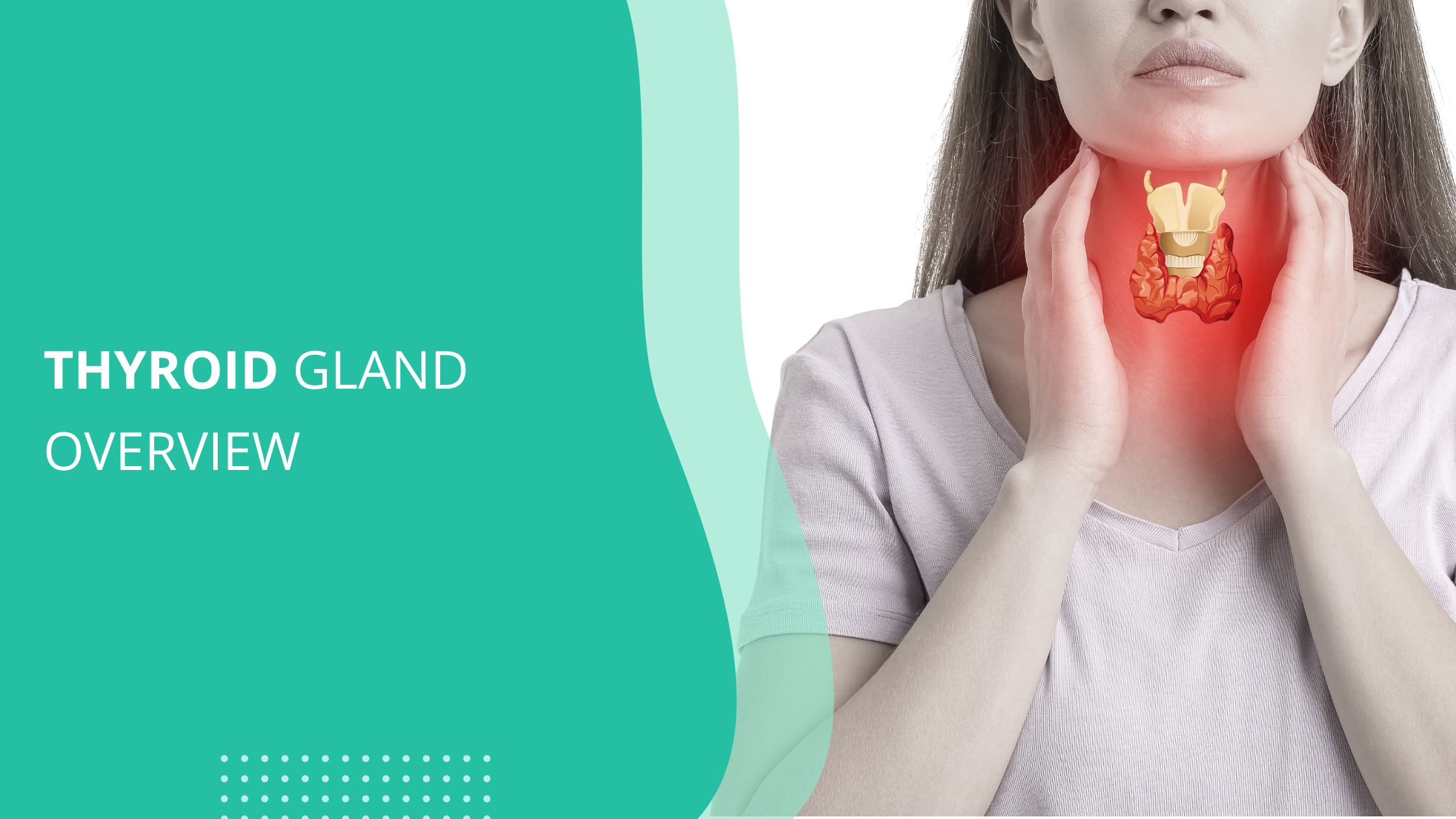 Next post we will delve into thyroid tests and thyroid dysfunction- specifically low and high thyroid. 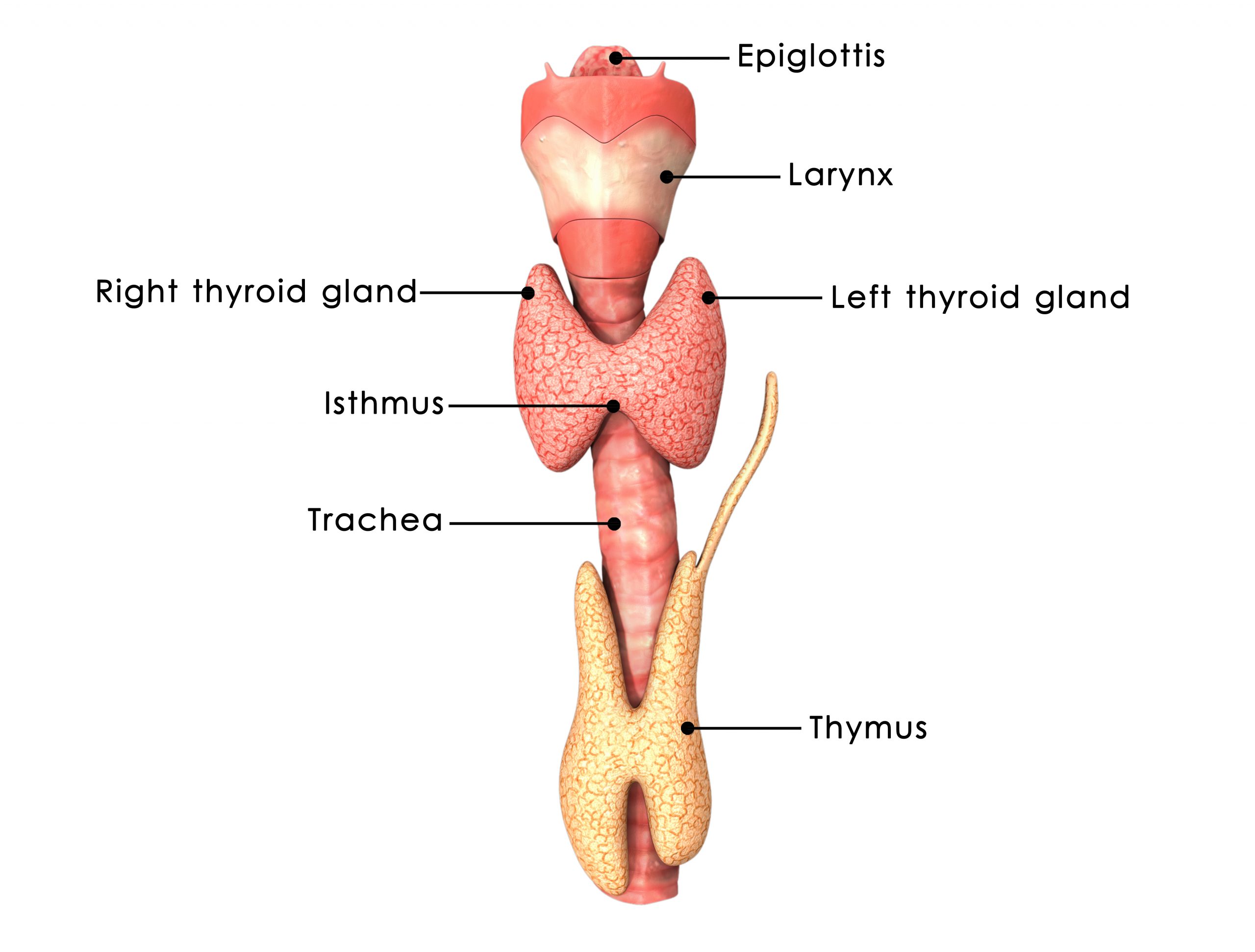 Thyroid gland and its function

Anatomy of the thyroid gland: 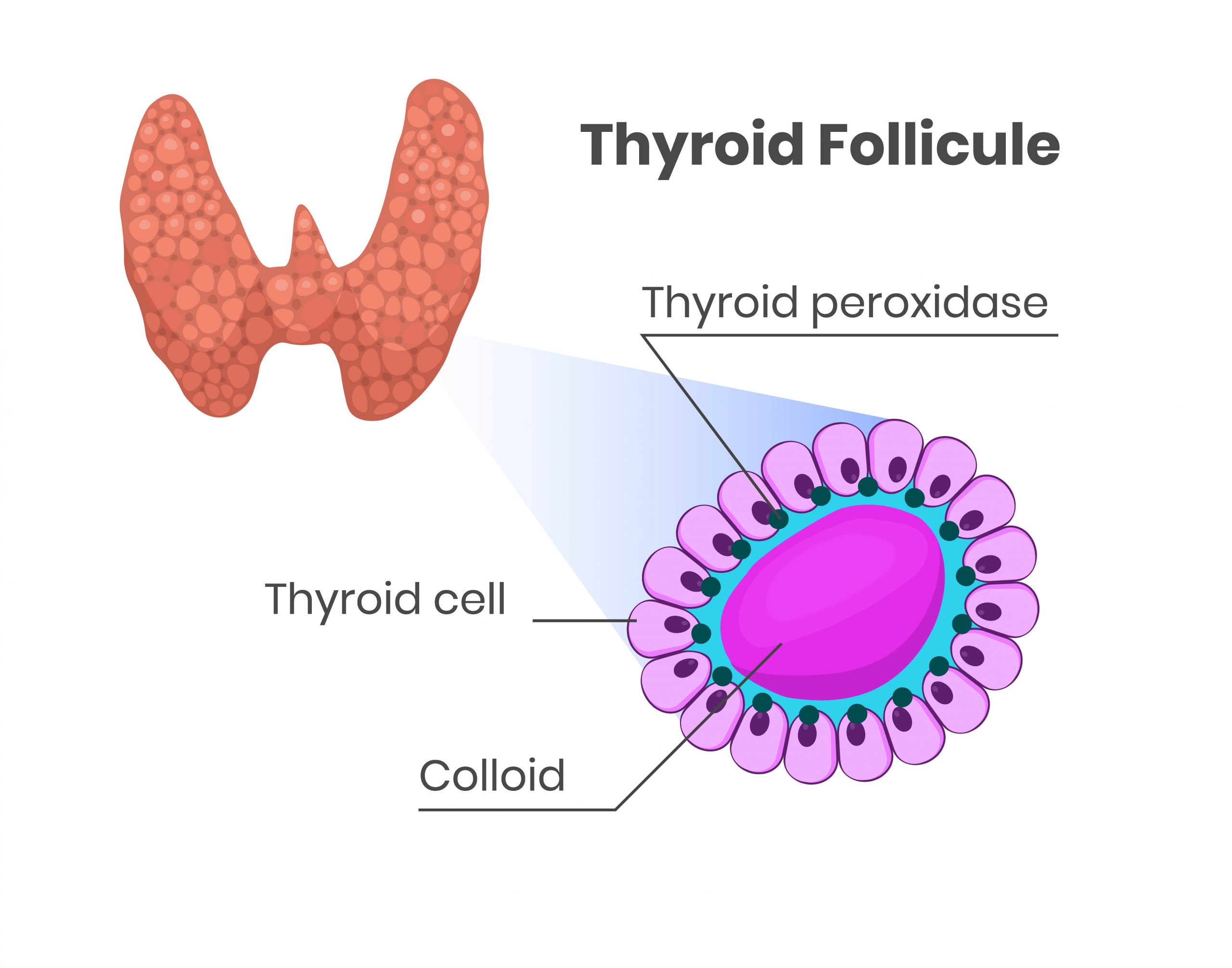 Every cell in the body has thyroid hormone receptors. These receptors control transcription and effect gene expression.

The thyroid gland is one of the largest endocrine glands and consists of two connected lobes. It is found in the neck, below the thyroid cartilage which forms the laryngeal prominence, or “Adam’s apple”. It is a butterfly-shaped organ and is composed of two cone-like lobes or wings, lobus dexter (right lobe) and lobus sinister (left lobe), connected via the isthmus. The thyroid is one of the larger endocrine glands, weighing 2-3 grams in neonates and 18-60 grams in adults, and is increased in pregnancy. The thyroid gland is covered by a thin fibrous sheath, composed of an internal and external layer. The thyroid tissue itself consists of a lot of small individual lobules joined together by thin sheaths of connective tissue. These lobules contain a great number of small vesicles, called follicles, which store thyroid hormones in the form of little droplets. These spherical follicles selectively absorb iodine from the blood for production of thyroid hormones and for storage of iodine in thyroglobulin (a protein present in the thyroid gland, from which thyroid hormones are synthesized). Thyroglobulin is also called colloid. Twenty-five percent of the body’s iodide ions are in the thyroid gland. Inside the follicles, in a region called the follicular lumen, colloid serves as a reservoir of materials for thyroid hormone production and, to a lesser extent, acts as a reservoir for the hormones themselves. The follicles are surrounded by a single layer of thyroid epithelial cells, which secrete T3 and T4. T3, also called triiodothyronine and T4, also called thyroxin are thyroid hormones.

Function of the thyroid gland

The thyroid plays an important role in regulating the body’s metabolism and calcium balance.  T4 and T3 hormones stimulate every tissue in the body to produce proteins and increase the amount of oxygen used by cells. The harder the cells work, the harder the organs work. The calcitonin hormone calcitonin works together with the parathyroid hormone to regulate calcium levels in the body. Some of the organ systems thyroid hormones regulate are:

Hormones produced by the thyroid gland

Check out this video on thyroid gland synthesis

What are the thyroid hormones and what substances do they contain? The thyroid hormones T3 (triiodothyronine) and T4 (thyroxine) are made of an amino acid, tyrosine, and an iodine molecule. For the hormone to be synthesized it must complete the following steps:

thyroid epithelial cells which has an outer plasma membrane called a sodium-iodide symporter, or more commonly known as an “iodine trap”. Once inside the cell, iodide is transported into the lumen of the follicle along with thyroglobulin.

4. These, meaning T1 and T2, further combine through the enzyme thyroid peroxidase (TPO) to make the final thyroid hormones: T1+T2=T3 and T2+T2=T4. The byproduct from both reactions is hydrogen peroxide.

5. The thyroid hormone is bound to thyroglobulin and is liberated by hydrolytic enzymes that digest thyroglobulin.

6. The thyroid hormone diffuses out of the lysosomes and into the blood where they bind to carrier proteins and are transported to target cells in the body.

T3 is up to four times more biologically active than T4. Only twenty percent of the body’s T3 is made by the combination of the T1 and T2 molecules. The additional eighty percent is made by T4 losing an iodine molecule in a process carried out in the organs such as the liver.

How is thyroid hormone regulated? 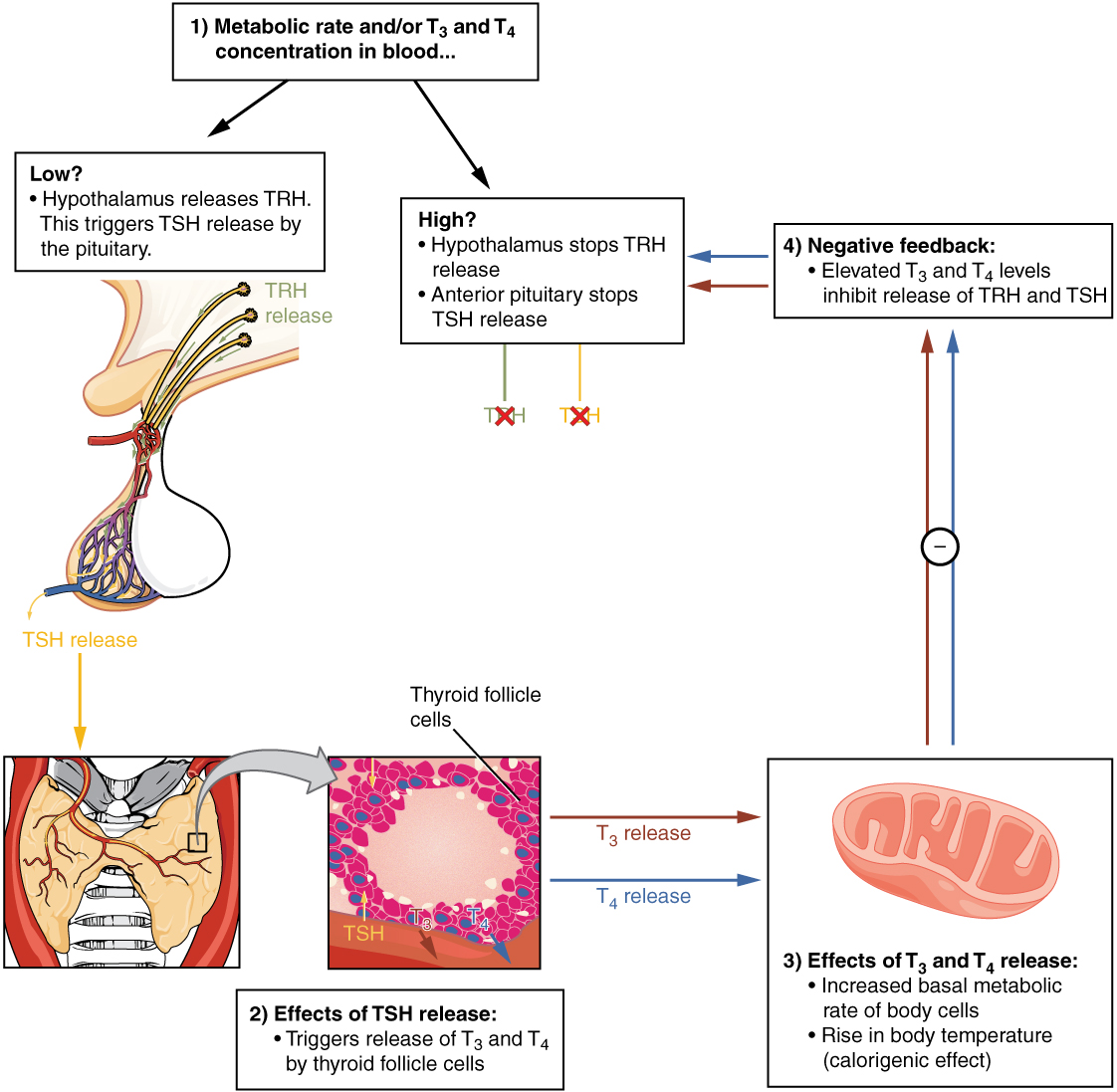 This is described as follows:

Nutrients needed by the thyroid gland

Selenium– Selenium content in the thyroid is higher than any part of the body. It is  a naturally occurring  trace mineral found in our foods and soil. One of the challenges with obtaining selenium from our food sources is that the levels can vary dramatically. Brazil nuts are known to be a rich source of selenium, but their selenium content varies according to the region they are grown in.

A selenium deficiency along with an iodine deficiency is implicated in goiters.

Iodine- Iodine is an essential element that is also needed from our environment. It is one of the building blocks of the thyroid molecule. For the body to be able to utilize iodine, it must be converted to iodide. This is accomplished through the thyroid peroxidase (TPO) reaction. Once this occurs, the free iodine joins with tyrosine to make the thyroid molecule, with hydrogen peroxide as the byproduct.

The group of molecules called the halogens; fluorine, bromine and chlorine mimic iodine and attach to tyrosine thereby rendering the tyrosine molecule useless. This means that your body is not getting the T4 or T3 it needs.  Sources of iodine include kelp, sea vegetables, cow’s milk, eggs, tuna, and navy beans. There are several over the counter iodine supplements. Caution should be exercised when using supplemental iodine. When there is an excess of iodine along with a deficiency of selenium, an autoimmune condition called Hashimotos thyroiditis may occur.

Tyrosine– Tyrosine is a nonessential amino acid the body makes from another amino acid called phenylalanine. It combines with iodine to form thyroid hormones. Tyrosine is also the precursor to neurotransmitters dopamine, epinephrine and norepinephrine. It is rare to have a deficiency in tyrosine and supplements are usually not recommended. Dietary sources of tyrosine are chicken, turkey, fish, peanuts, almonds, avocados, bananas, milk, cheese, yogurt, cottage cheese, lima beans, pumpkin seeds, and sesame seeds.

Zinc– Zinc is required to transform the inactive thyroid hormone T4 into the active form T3.  It plays an important role in immune function, wound healing, blood clotting, reproduction, growth and smell. Zinc supplementation should be approached carefully. If too much zinc is taken, a copper and iron deficiency can result. Also, taking too much zinc intake can contribute to hyperthyroidism and copper deficiency. Foods rich in zinc are raw pumpkin seeds, oysters, wheat germ, and lamb.

Iron (Ferritin) – Iron requires a high stomach acid for transport into the cells. Many people take iron tablets, and their iron levels stay the same due to low stomach acid.   Having low iron levels decreases deiodinase activity. It slows down the conversion of T4 to T3.  Insufficient iron levels may affect thyroid hormone synthesis by reducing the activity of the enzyme thyroid peroxidase (TPO) which is dependent on iron.  Thyroid peroxidase (TPO) brings about the chemical reactions of adding iodine to tyrosine (amino acid), which then produces T4 and T3. Insufficient iron levels alter and reduce the conversion of T4 to T3. Low iron levels can also increase circulating concentrations of TSH (thyroid stimulating hormone).

Apple cider vinegar or Betaine, a supplement which enhances stomach acidity, promotes protein breakdown and iron absorption.  The most bioavailable form of iron is called heme and is found in liver and meats.