Its tick season, Are you ready?

Its that time of year again. Along with lovely, warm, sunny days, gardens in full production, Long walks along winding paths through the woods comes the emergence of the dreaded tick. Honestly, I haven’t found ticks to be of much good use other than food for birds, frigs, spiders and other animals.  They carry many disease and can be difficult to find on the body.

Although ticks are commonly thought of as insects, they are arachnids like scorpions, spiders and mites. Ticks are among the most efficient carriers of disease because they attach firmly when sucking blood, feed slowly and may go unnoticed for a considerable time while feeding.

Where are ticks found

Ticks are usually found outdoors in wooded and grassy areas but are also found in cabins, woodpiles, and caves. They can even be found on your dog after a romp through the grass!

They way ticks find their next meal/host is by detecting the animal’s breath and body odors, by sensing bod heat, moisture, and vibrations. They wait for a host by resting on the tips of grasses and shrubs along well traveled paths. Since they can’t fly or jump, they rest on the tips of grasses or shrubs in a position known as “questing/ From there the ticks latch on to its host.

Some ticks will attach quickly, and others will wander, looking for places like the ear, or other areas where the skin is thinner.

Many ticks go through life cycles that can span 3 years and go between different hosts. In this way they can widely spread disease between hosts.

Lyme disease is probably the most well known tickborne disease, however there are several other diseases that ticks carry. For instance, the Lone Star tick can carry Heartland virus which can cause severe illness and even death. The Lone Star tick also can cause an allergic reaction called alpha gal syndrome which causes the host to become allergic to red meat.

A new CDC study discovered the blacklegged tick, which is found in the eastern half of the US can spread seven diseases. They are listed below:

The most widely known and reported tickborne disease that is most likey very underreported is Lyme disease:- approximately 30,000 cases are reported every year, however insurance statistics put the yearly total at more than 476,000 cases that are diagnosed and treated every year.

Lyme disease can be treated effectively with a single dose of doxycycline if diagnosed soon after bitten. (Note that the Jase case is equipped with doxycycline as one of the five antibiotics) If treatment is delayed, Lyme disease can manifest in many debilitating diseases, such as arthritis, facial paralysis, rashes, fevers.

Below is an image of early stages of the rash. More information can be found on the CDC website under Lyme disease. 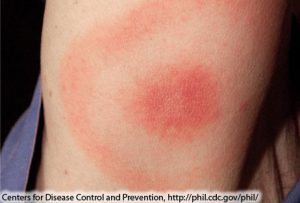 There are so many different diseases that are caried by ticks, that many health practitioners aren’t aware of all the diseases and symptoms. It would be almost impossible for your health practitioner to know each tick exposure and associated diseases. It is the responsibility of the individual to know the common ticks and diseases they may carry when venturing outdoors. The CDC has an extensive website on disease causing ticks.

Before You Go Outdoors

Know where to expect ticks. Ticks live in grassy, brushy, or wooded areas, or even on animals. Spending time outside walking your dog, camping, gardening, or hunting could bring you in close contact with ticks. Many people get ticks in their own yard or neighborhood.

Avoid hiking through wooded and brushy areas with high grass and leaf litter.  Walk in the center of trails. Keep lawns mowed, weeds to a minimum in the yard.

After You Come Indoors

Check your clothing for ticks. Ticks may be carried into the house on clothing. Any ticks that are found should be removed. Tumble dry clothes in a dryer on high heat for 10 minutes to kill ticks on dry clothing after you come indoors. If the clothes are damp, additional time may be needed. If the clothes require washing first, hot water is recommended. Cold and medium temperature water will not kill ticks.

Examine gear and pets. Ticks can ride into the home on clothing and pets, then attach to a person later, so carefully examine pets, coats, and daypacks. Consider tick preventative medication or collars for your pets.

Shower soon after being outdoors. Showering within two hours of coming indoors has been shown to reduce your risk of getting Lyme disease and may be effective in reducing the risk of other tickborne diseases. Showering may help wash off unattached ticks and it is a good opportunity to do a tick check. 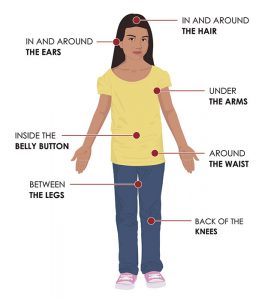 Create a tick safe zone to reduce or eliminate ticks in your backyard.

A word about essential oils and their efficacy in acting as a tick repellent:

The product BioUD with the active ingredient 2-undecanone found in the wild tomato was found is as effective as DEET in repelling ticks. This product is no longer available.

How to remove a tick

The following is directly from the CDC website on tick removal, they have a “tick bot” that can guide you through the process of safely removing the tick if you should happen to find one embedded in your skin.

Use clean, fine-tipped tweezers to grasp the tick as close to the skin’s surface as possible.

After removing the tick, thoroughly clean the bite area and your hands with rubbing alcohol or soap and water.

Never crush a tick with your fingers. Dispose of a live tick by

If you develop a rash or fever within several weeks of removing a tick, see your doctor: